C is for Cranberry (that's good enough for me)

Requested by loyal reader Patti, I'm embracing the (now-over) holiday season with cranberries, a fruit about which I know very little:

- Cranberry juice is apparently especially good for maintaining healthy lady-bits
- and is also quite tasty in a Cosmopolitan. Coincidence?
- The Cranberries (band) were a big part of the soundtrack for my late high school/early college years.
- Helping harvest cranberries seems to be a popular way to torment TV hosts.
- Many people have encountered the Canned Cranberry Gel Loaf as a part of holiday feasts. Some respond to this by hating it, others crave it. I'm one of the haters.

Now for some research:
- it's an evergreen
- native to North America
- called a "superfruit" (a marketing term that basically indicates a fruit with lots of antioxidants)
- seldom sold or eaten in its unprocessed form
- though it is harvested from flooded fields, it doesn't grow in water
- the research that indicates drinking cranberry juice can help prevent UTIs in women was in the British Medical Journal, vol 322, pp 1571-1573, (June 29) 2001, in case you're curious.
Posted by Raej at 2:10 PM No comments:

T is for Turkey

A bit out of order here, I know, both temporally and alphabetically, but I wanted to share pics of my gorgeous Thanksgiving beastie: 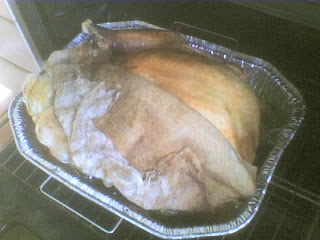 This is mid-process and that thing covering half of Mr. Turkey is a lint free towel.
I soak it in melted butter and cover the turkey with it at the start of the cooking process. Basting takes place both over and under the towel every 15 minutes.

Yes, I know, I know, you can go the roaster bag or aluminum foil route but I got this method from the Joy of Cooking and
a) It has never, ever failed me. 7 years strong here, people.
b) My turkey is annually praised as one of the moistest anyone has encountered. (Somehow that sounds naughty. Hmm.)
c) What else exactly am I going to be doing on Thanksgiving anyway? Composing a symphony? Working on my juggling skills? 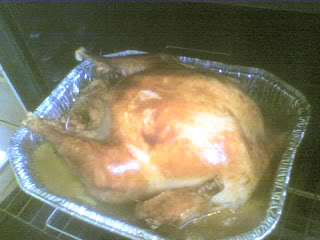 Happy Holidays to everyone! More from me soon.
Posted by Raej at 4:52 PM No comments:

B is for Bacon Beignets - Where Are They Now?

I've thawed and fried 6 in the past couple of days and i have to say it has worked beautifully.

You just move a few frozen beignets into the fridge from the freezer the night before and you're good to go for breakfast. Or you can set them out on the counter to thaw at lunch (yes, yes, I know: Unsafe Food Practice! But, let's be honest, we all do it at home) and have them thawed by dinner time.

Then you set them in a warmed over to rise and fry them as you would when the dough is fresh.

(I am now non-employed, so there should be more updating as we move into C. Stay tuned!)
Posted by Raej at 6:09 PM No comments: