I is for Iron Foodie Ingredient Sampling

Neither of which I had ever, to my knowledge, eaten. Yay for new food!

First things first, before I could really taste them, I had to macerate them... 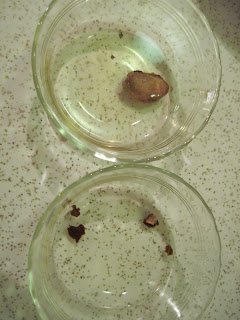 ...in this case, with boiling water.

The porcini mushroom had a nice intense flavor that, in weight, reminded me a bit of chicken liver. The texture was a bit chewy, so it's clear that I can't use these "raw".

The chili bits were, ummm, weeeeeell, I considered them spicy, but I tend to order a one-star at Thai and Indian restaurants. Even I can admit they were not really painful. And I could actually taste the red chili flavor. So "mild" is probably an accurate description.

Odds are good that we will find both of these ingredients in my Signature Recipe. :)
Posted by Raej at 11:16 PM No comments:

T is for Tech Week

The show I'm rehearsing is heading into Tech Week. (For those of you not in theatrrr, this means every waking moment, which will include more of those than usual, will be focused towards getting together a performance-ready piece by the end of the week.)

So I'm spending the evening working on my Iron Foodie recipe. Stay tuned.
Posted by Raej at 12:12 AM No comments:

T is for Egyptian Turkey 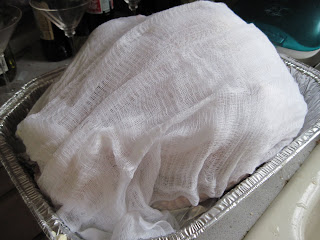 The way I do the thanksgiving turkey winds up looking like I'm preparing it for the afterlife.

As I said last year, I get my turkey method from The Joy of Cooking and, after 8 years, I'm a true believer. I know a lot of people are becoming converts to The Church of Brining, but the barding/basting 1-2 punch has never let me down, so I don't see changing it up any time soon.

But I can live in harmony with my brining brethren. 'Cause, really, isn't that what The Thanksgivinging is all about?
Posted by Raej at 4:20 PM No comments:

T is for Egyptian Turkey

I is for Iron Foodie Thoughts

Not to give too much away before the actual recipe, but I've been chewing on the contest a bit (pun intended) and here's where I am:

- Everything in the box is essentially a spice (not technically, granted, but due to the dried-ness of things that would otherwise be more feature-able). This is both a great thing and a scary thing. (Yay, I can do anything! Whoa, I could do anything. Like that.)

- What do I like to cook? I ask myself, in order to narrow things down a bit. Answer: breakfast, dessert, Italian food, meat. I'm likely to do something in one or more of those categories.

- Next up will be some ingredient tastings. Every time a cheftestant on a cooking reality show doesn't do this, I get very indignant at them (from the safety of my couch; yeah, I'm totally an armchair sous chef). So it's be pretty stupid of me not to. I'll keep you posted.
Posted by Raej at 7:57 PM 2 comments:

I is for I still -heart- South Park

I'm sitting here watching the episode of South Park mocking the Food Network (and Food Network addicts...er, like me) and it's just so wrong but oh-so-right at the same time.

They had me at the late-nite Food Network HOTline:

Other items in The Mysterious Marx Foods Box of Mystery:

~ Dried Aji Panca Chilies ~
The label says they are "mild". Being a spice wuss, I'm betting a more accurate assessment is "comparatively mild".

~ Tellicherry Peppercorns ~
I did some pepper taste experiments a few years back, which is what led me to the wonderfulness that is White Pepper. I look forward to seeing how this one compares.

~ Maple Sugar ~
Oh baby. This ingredient is in serious danger of not making it into recipe consideration because I may just have to eat it. I'll put it in one of those giant straws like I used to get at the roller skating rink and then ride the sugar high for the next 12 hours.
Posted by Raej at 6:25 PM No comments:

Turns out The Mystery Box of Mysterious Iron Foodie Ingredients was on my doorstep when I got home Friday: 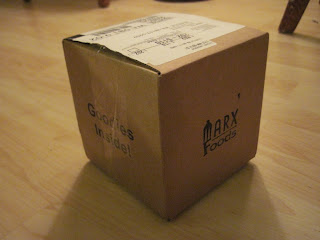 It was, without contest, the best smelling box I've ever opened. 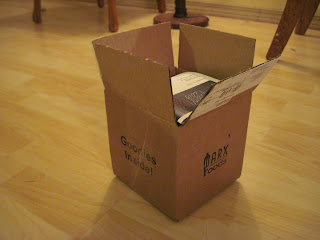 Alas that there was no elk.
Ah well. All of the ingredients were dry, so it would've had to've been elk jerky, anyway. Try as I might, I just can't make myself feel too bad about a lack of elk jerky in my life. 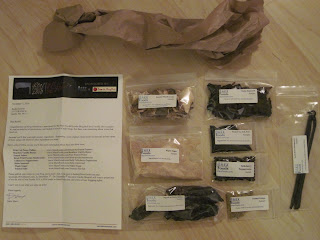 So there we have it. The strongest scented ingredients were the vanilla bourbon beans, the smoked salt (smells like BACON!) and the fennel pollen. More on the, ahem, subtler ingredients tomorrow.
(Not to worry. In the meantime, I'll be busy formulating my evil, contest-winning plan! Er, I mean, recipe. Yeah. Mwah ha ha ha ha!)
Posted by Raej at 5:00 PM No comments:

Well hey howdy hi, I got chosen to compete in the Marx Foods Iron Foodie Contest!

As I type, apparently a box of 8 tasty food items is winging its way to me. I will need to use (at least?) 3 of these items in a Signature Recipe.

Since the box has already been sent, I have no scruples about telling you I'm crossing my fingers for Elk. I mean, "E" is next on the agenda, after all.

Oh, and truffles. Just because, hey: TRUFFLES.
Posted by Raej at 5:43 PM No comments:

D is for Duck Liver Pâté

Once upon a time a blogger bought and cooked a duck.

Many moons later she blogged about it.

Two point five moons after that she finally got around to doing something with the duck liver.

Sooooo, I was _planning_ on following this recipe I found on epicurious pretty darn closely. Because making a pâté seemed like a fairly complex undertaking.

However, typically, I didn't have all the ingredients I needed, (FAIL!) so I had to make a couple of substitutions on the fly. (Remind me later to tell you about the time I got halfway through a batch of Toll House Cookies before realizing I was out of eggs. Sigh.)

*I had to guesstimate the amount. Unless the ingredients in question are coming from a can, 'ounces' aren't a recognized unit of measurement in my kitchen. I used an glob of bacon fat that appeared to be about the same size as the liver and crossed my fingers. 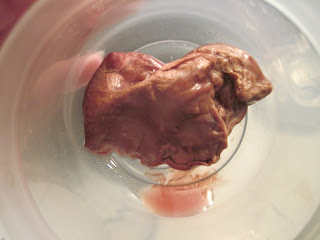 1) Place bacon fat in a skillet, and cook over medium heat for 4 to 5 minutes, until the fat melts.

1.5) Chop the shallot, garlic and liver while waiting for the fat to melt.

2) Add the shallot to the fat, cook for about 30 seconds, stirring once or twice.

3) Add the liver, herbes and garlic, and cook over medium heat for two minutes, stirring occasionally. 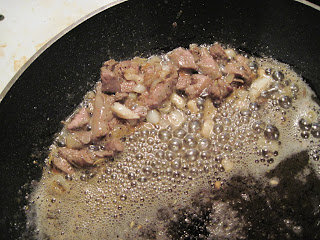 **This is about when I realized that no part of making the pâté would be visually appealing. It smelled really good, though.

4) Add the salt and pepper. Remove from heat.

5) Throw everything into the food processor, add the vermouth, and blend until liquefied.

6) Cool in the fridge for about 30 minutes. Make toast during the end of this time.

How Did it Go?
Not too bad. Yeah, I think I can say that. It wasn't a pretty food, but it was definitely yummy. (Maybe this is where I should mention that I like braunschwager, just to give you a reference point for my taste.) It was probably a bit flat compared to Professional Pâtés, but I'm working from memory here, so I can't say for certain sure what the difference was. 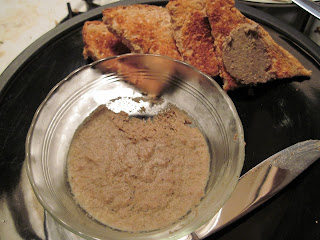 What Would I Do Differently?
Where to start? Um…

- The original recipe called for a much longer cooling time. So I'd be interested to see if that was different taste-wise, or was just a texture thing.

- I'll admit that serving this on toasted pre-sliced sandwich loaf felt a little ghetto. If sharing with guests I'd definitely get a schmancier bread involved.

- Given duck livers enough and time, I'd try making several pâtés with several different alcohols. The vermouth was fine, but I find myself wondering about scotch…
Posted by Raej at 9:06 PM No comments:

D is for Duck Liver

Ok, hold onto your hats, kiddos. I think I'm going to try a little duck liver pate this evening.
Posted by Raej at 6:56 PM No comments:

I Wanna Be an Iron Foodie! (I Wanna Live a Life of Duty)

- Why do you want to compete in this challenge?

Besides the fact that I would adore the chance to be on Iron Chef someday (Iron Chef Fantasy Camp! Who's with me?), messing about with new ingredients is absolutely why i started this blog. It's a love match!

- Limitations of time/space notwithstanding, whose kitchen would you like to spend the day in & why? Julia Child, Thomas Keller, Ferran Adria, James Beard, Marie-Antoine Careme, or The Swedish Chef?

Totally The Swedish Chef. Not only does he personify the combination of my two greatest passions (cooking and puppets), but he was just such a pioneer in the field of Ballistic Gastronomy; it would be an honor to learn from such a master.

- What morsel are you most likely to swipe from family & friends’ plates when they aren’t looking?

Pickles. Can't get enough of them. (NOT PREGNANT, don't even suggest it.)

- Sum your childhood up in one meal.

Hamberger Casserole. Made in a classic Corningware dish, this family favorite recipe included not only mashed potatoes, but also Campbell's Tomato Soup and Velveeta. The cooking in my house growing up was all about the balance between comfort and convenience. (Frankly, I'm still a fan of this approach, though Mr. Husband draws the line at Velveeta.)

- The one mainstream food you can’t stand?

Bell. Peppers. Horrible, Fascist vegetables. The teeniest little amount of of bell pepper in a dish and BOOM! the flavor just takes over everything. Bleh and double bleh. Also, they give me gas. That's not good for anyone.
Posted by Raej at 5:46 PM 2 comments:

B is for Blogroll

Hey Campers. I've just joined The Foodie Blogroll! Look for more frequent blogging in the very near future.
Posted by Raej at 5:43 PM No comments: