B is for Blogging. A lot.

B is for BAKON (bacon flavoured vodka) 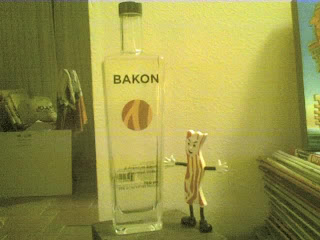 I'd heard about this Bacon Vodka a few months ago but did not encounter it in the store until last week. I decided that our chance meeting was Fate and immediately brought a bottle home... 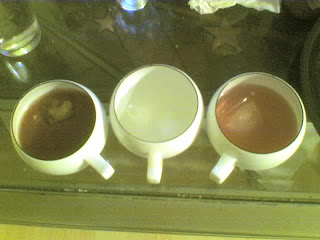 ...where I mixed it into three of my favourite vodka cocktails: Bloody Mary, Vodka Martini and Cosmopolitan, respectively.

But to be completely fair to Bakon, I decided I should also try it straight up against an unadorned vodka: 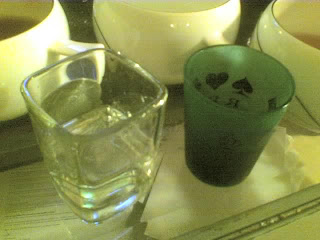 The verdict:
Bakon was great in the Bloody Mary, would've been ok in a dirty Vodka Martini and not really the thing in the Cosmo. I also would not recommend it straight unless you are generally in the habit of inhaling deeply from a vial of Bac-os after taking a shot of vodka.
Posted by Raej at 2:38 PM No comments:

B is for Warm Bacon Vinaigrette

Let's begin gently, shall we? The first time I encountered a warm bacon salad dressing was having dinner with/meeting Mr. Husband's (Mr. Fiance at the time) parents. I'm usually just as happy to skip the salad and get straight to the entree, but I wasn't in charge of the flow of the meal. And I fully admit, I don't actually remember what we ate for the main course that night. What I remember is the magical combination of spinach and bacon. Mmmmm.

But I had never made it for myself at home. I consulted the interweb, particularly this recipe from Chow before starting, but (of course) jumped off a bit to adjust for personal taste and ingredients not at hand.

- I cut the bacon into small pieces (a rustic dice, if you want something to call it. aka, unskilled knifery)
- Then I put the bacon in a medium frying pan over medium heat and cooked, stirring once in awhile, until crispy.
- While the bacon was cooking, I washed the spinach, cut off the stems (snacked on those; they are tasty) and tore the spinach into bite-size pieces. I seperated that into two bowls.
- Added the nuts on top of the spinach.
- I also sliced a hard boiled egg and put it on my salad (Mr. Husband doesn't like hard boiled egg, so that leaves more for me)
- Spooned the finished bacon onto a paper towel-lined plate.
- Kept the pan with bacon fat over the heat, added the shallot, and cooked about 30 seconds.
- Then I whisked in the vinegar, brown sugar, and Dijon mustard
- IF YOU WANT YOUR SPINACH WILTED: Keep the vinaigrette on the heat and season with salt and freshly ground black pepper.
- And then pour it directly over the salad.
- IF YOU DO NOT WANT YOUR SPINACH WILTED: Remove from heat to season. (I did the second of these, following the recipe too far, but would rather have gone the Wilted route)
- And then I sprinkled 1/2 of the bacon over the top of each salad.

What I would change:
Very little. Just would've made sure it was still hot when it encountered the spinach. Next time.
Posted by Raej at 8:44 PM No comments:

B is for Bacon Bacon BACON!

Still a bit safe as far as ingredients go, but I can’t resist; I love bacon. How much do I love it? This much: 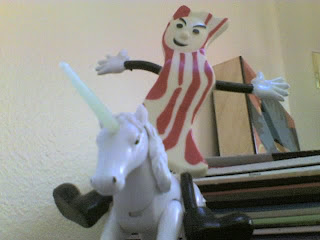 What the heck is it? Bacon is cured meat from a pig. Now, since I’m American, my bacon of choice is cut from the pig belly (“streaky bacon” to those of you located elsewhere). In other lands, they tend to go for back and side cuts; less fat, but to me it always seems a bit more like ham.

A is for Pork-stuffed Apples...

...and L is for Lazy Blogger. Sorry 'bout that.

This was my other attempt at a savory apple dish. Not entirely successful but, hey, not a kitchen meltdown either.

In the Prince Caspian book of The Chronicles of Narnia, the Pevensies eat bear meat roasted around apples while they're marching through the woods towards Caspian, and I’ve always thought that sounded oddly good. (The food, not the marching). So that’s where this started for me. Unfortunately I couldn’t find a source for bear meat.

The Joy of Cooking had a recipe for Sausage-stuffed Baked Apples, and that nudged me in a pork-ward direction (never a hard sell).

Here’s what I did: 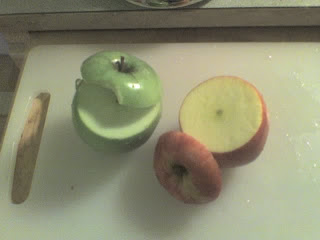 - Lopped the tops off and dug out most of the insides of two apples.
- Seasoned two pork chops with sage, salt and white pepper. Cubed one and shoved it into the apples, sliced the other in half long ways and wrapped it around. 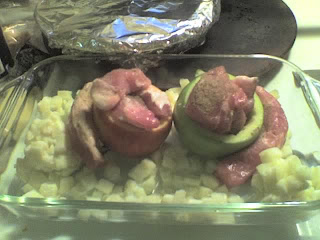 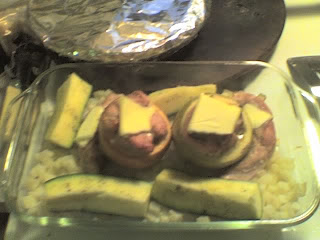 - I pulled it out to check the progress at that point and added some butter to the top of each apple. (I was worried about the pork being too dry.)
- I also added some zucchini to the dish and put the whole thing back in the oven for another 30.

How did it turn out:
It was ok, but the pork was a bit dry (darnit) and under seasoned (eep) and the side veggies didn’t really “go” with the main part (ok, probably something I wouldn't worry about if i didn't watch so many cooking shows). It was fine for home cooking. I mean, we ate it all and weren't hungry later or anything, but I wouldn't have wanted to serve it to guests. 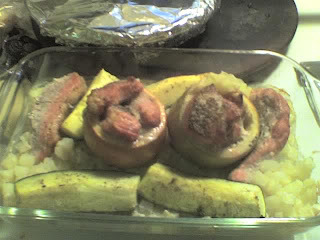 What I’d change:
- The meat needed more moisture.
- I’d either try a fatter meat option next time,
- or marinate the stuff for a bit (which would've added more seasoning too. Hmm)
- or maybe try cooking the dish covered. I’m bad about that.

- The meat should’ve been smaller, to better fill up and get cozy with the apples. A nice mince or even a ground option would’ve been better, I suspect. Bad on me for being lazy in the meat breakdown.

- Still not really sure what sides would’ve suited better here. Way open to suggestions.
Posted by Raej at 8:52 PM No comments:

Randomized for your protection

- Naturally I watched The Next Iron Chef Sunday night. I think this will be a very good season.

- Funniest thing said in my house in response to the show: "Looks like 'confit' has become the new 'ceviche'."

- Oh hey, that thing I auditioned for week before last? Totally got the part. Huzzah!
Posted by Raej at 4:34 PM No comments:

A is for Apples in the Curry

I was looking for something different apple-wise and some savory action besides. I was also facing the oh-so-typical modren dilemma of "I just washed a pound of chicken and I can't do a thing with it."

I don't think apples plus curry would've occurred to me without having seen this recipe.

What I did (not counting this as a recipe, because I played the whole thing by ear):

I got some olive oil heating in the bottom of my stew pot over a medium and then tossed in the chicken (purchased pre-cut for stir fry; lazy, I know). I threw some curry powder, garlic salt, ginger, cilantro and white pepper on it and gave it a stir, then minced a garlic clove and added it.

Next I threw in some hash browns (the cubed kind, not the toaster patties). Periodic stirring until the chicken cooked through, then added a bit of wine, butter and water (basically enough liquid to cover the mass of stuff). Cubed up some zucchini, and peeled and cubed a Gala apple and added those along with some frozen peas.

Once the peas looked cooked-ish, I stirred in a can of lentil soup and a bit more water. Then I let the whole thing simmer for awhile. Right before eating, I stirred in a bit of milk.

The verdict:
Tasty. The apples really worked and subbed in nicely for the dried cranberries I normally would've used.
Posted by Raej at 9:23 PM No comments:

Z is for Zucchini, My Other Inspiration

I've babbled a bit about what possessed me to do this, but while I was blanching vegetables night before last I realized there was a little more to the story: 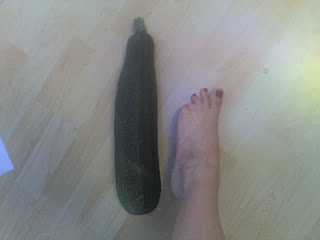 Ever since I can remember, I've both wanted to cook and wanted to garden. Kitchens being a little easier to come by than real estate, my first real go at a vegetable garden was last summer.

It was, weeell, mostly a learning year. My own fault; I jumped in without doing much research (I did read the back of the seed packets, but those are not as informative as one might hope), and the only things that did solidly well were the swiss chard and the purple string beans (hurray! for low maintenance plant relationships).

I spent the winter reading up a bit and now have an embarrassment of tasty green riches. I love zucchini, but had only really cooked it one way prior to this August: sauteed in chunks. A yummy enough preparation, but not something you want to do five days in a row. Having been forced into cohabitation with all this summer squash, I now know how to grill it, bake it, stuff it, hide it in cookies and freeze it for the winter. So I thought, "Hey! This method could work for other foods! Whee!"

So here we are. Trying to figure out one last thing to do with apples.
Posted by Raej at 6:52 PM No comments: