C is for Cranberry-Blueberry Muffins

I've made muffins from a mix before but never from scratch. My bag of dried cranberries (plus a bag of dried blueberries that I'm looking to use up because I find them too sweet) inspired me to give it a go.

The muffin base recipe is mostly from Joy of Cooking. I went my own way with the mix-ins treatment. 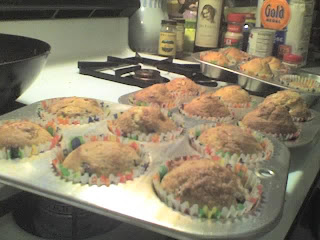 0.5) Soak the dried fruit in the wine for an hour or so. (This is also called macerating, if you want the five dollar word).

3) Beat the eggs until mixed.

4) Mix melted butter and milk into the beaten eggs.

6) When the dry ingredients are almost completely moist, add the fruit and finish mixing.

7) Either grease your muffin pans or line them with cupcake cups and fill them up approximately 2/3 full with batter. (I just use a big spoon for this.)

How'd it Go?
Not bad. The texture was really good. And the flavor was good, except…they just weren't as sweet as I'm looking for in a breakfast muffin. If these had been muffins intended to go along with stew, they would've been perfect.

Tried one in its natural form. Unbelievably tart!
Posted by Raej at 1:51 AM No comments:

C is for Cranberries?

I'm a little stalled out in C by being unable to find fresh cranberries in my usual grocery stores. Apparently those are only a Christmas food. I'll keep working on it, but in the meantime need to adjust plans to use Craisins and/or cranberry juice.

C is for Cranberry Bread Pudding

We host an Orphan's Thanksgiving every year, potluck-style, so each Black Friday finds me with some ingredients in my kitchen that wouldn't normally be there. I enjoy this, because it gives me a chance to play, but I was initially perplexed by this year's leftover Can of Gelled Cranberry Loaf. Fortunately the delicious loaf of day-old home baked bread inspired me: (As usual, I researched a couple of recipes online before starting.)

Here's What I Did:

- Whipped Cream -
whipping cream
confectioner's sugar
(optional, because I will not judge you if you prefer Cool Whip or spray whip cream. I only made this because I had the cream handy)

1) Put 1/2 of cranberry gel in a small saucepan and add the milk.

2) Over low heat, whisk together until mostly combined.

3) Whisk in flan powder until combined.

4) Turn the heat up to low medium and bring to a boil, stirring frequently.

5) While waiting for the pudding to boil, butter the sides of a small loaf pan.

6) Break down the loaf of bread into bite-size chunks and place in the loaf pan.

7) Once the pudding has reached a boil, pour it over the bread chunks. 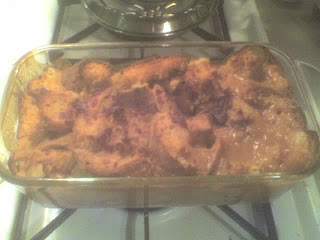 9) Place the other half of the gel in another small saucepan.

10) Over low heat, add confectioners sugar and vodka to taste (I wound up using about a 1/4 cup of each), stirring constantly.

11) Bring it to a boil and boil for about a minute, stirring frantically.

13) Serve pudding in slices, liberally covered in sauce and cream. 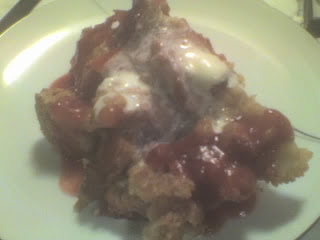 How'd It Go?
Surprisingly well, considering I've never, ever made bread pudding before. I felt like the pudding absorption was kind of inconsistent, so the texture varied throughout the slice in a way I didn't love, but it was definitely tasty. And the sauce was deemed awesome by Mr. Husband.

What Would I Change?
- I think a vanilla pudding might have gone a little better with the cranberries than the flan.
- More of the pudding probably would've solved my texture issue, so next time I'll kick it up to the 6 serving sized box.
Posted by Raej at 6:36 PM No comments:

C is for Chairman

Having quit my job almost a month ago (due to a lying, dishonorable boss plus an abusive co-worker), naturally I'm looking around for new employment.

A friend told me that one of the first questions she always asks an interviewee is "What is your dream job?"

"Easy," I replied. "I want to be The Chairman on Iron Chef."

You get to wear nice clothes, hang out with Alton Brown and eat really good interesting food. Your every move is foleyed (swoosh! whoop!) and you don't even have to judge.

All this plus a paycheck? Sign me up!
Posted by Raej at 6:37 PM No comments:

C is for Cranberry Champagne Cocktail

One of the nicer duties of my former job involved specialing up Opening Night of each show with cocktails. This is the one I used for the Christmas show in 2008 (I _almost_ said last year there, yes):

- combine and serve in a champagne glass (if you have them)

Simple yet tasty, festive, and popular with the people. Happy New Year, folks!
Posted by Raej at 10:28 AM No comments: