H is for Holiday Cooking

I've traveled to see family for the last seven years, so my December holidays find me doing very little personal baking, but plenty of cooking in other people's kitchens.

Like yesterday, when I was urgently requested to make a batch of chocolate chip cookies. They were completely gone within 8 minutes of hitting the plate.

Or take today, when we made five dozen cookies. I'm hoping they last for awhile. A long while.

And then tomorrow I am to whip up some Toasted Ravioli. I'll be using the easy method, which would feel like cheating except

a) my sister doesn't have a pasta maker or a food processor
b) you can buy frozen Toasted Ravioli in the store here, so i'm actually being much less lazy than i _could_ be.

I think Christmas Day I'll be in charge of green beans (casserole style) and gravy. Let's start praying to the gravy god now, shall we? No lumps, no lumps, no lumps.....

Anyway, whether your Christmas finds you up to your elbows in flour and giblets, or being decorative while others do the heavy cooking, I hope you have a happy one!

S is for Sixth

Just wanted to say: Thanks for voting for me in the Iron Foodie Challenge.

I got sixth. Not bad for a relative beginner. It comes with no further prize except a warm and fuzzy feeling. Mmmmm!
Posted by Raej at 9:43 PM No comments:

I is for Iron Foodie, Prequel 3

or E is for Easy Toasted Ravioli

Before I launched into my Iron Foodie recipe, I decided to do a Proof of Concept pre-run (Mythbusters fan, yes).

I'd found plenty of easy-ish looking Toasted Ravioli recipes out on the interwebs, but I had no idea whether or not they would wind up tasting like the real thing.

Hey, what better time to take on a completely untried recipe than Thanksgiving? Oh, just about any time, I would normally say. Since I, however, am an experienced member of The School of Turkey Basting, I wind up with a fair amount of free time in the kitchen on Feast Day. So I jumped in.

1) Use a fork to mix together egg and cream in a shallow bowl.

2) Put the stuffing cubes and cookie into food processor and mix until the cubes are crumbs. Place in a bowl or on a small plate.

3) Fill a skillet with oil for frying (I like to go about 1/2 inch deep. You do what suits you) and warm over medium heat.

4) Dip ravioli in the egg mixture, shake off excess.

7) Pour sauce into a small sauce pain and warm over low heat.

How Did it Go?
Great! I put this out as an appetizer and people devoured and praised it, despite not having ever heard of it before. (Not a lot of St. Louisians on hand here in Seattle.) So, concept proved as far as I was concerned.

What Would I Change?
- I started heating the oil a little late, so the first couple of ravioli weren't as crispy as I would have liked. I wound up adjusting this for my Iron Foodie recipe.
- The cookie crumbs wound up a little too big. They tasted ok, but it threw the texture off a little. (To me. Pretty sure my friends didn't notice/care.)
Posted by Raej at 11:59 PM No comments:

E is for Foods that start with E?

While I wait and hope to become an Iron Foodie, it's also probably time to get back to regular business, yes?

We're on the letter E. Currently under consideration:

Any suggestions from the peanut gallery? I'm open.
Posted by Raej at 6:50 PM No comments:

I is for Iron Foodie Ingredient Sampling, part 2

Ideally I'd've talked about this _before_ posting my Iron Foodie entry recipe, but, well, Tech Week interfered. Consider this a prequel. : )

The Marx Foods Box of Mystery contained two ingredients that, in my opinion, needed a platform for useful/accurate tasting:

(Of course you _can_ eat pepper and salt plain, but they don't tend to taste very good that way.)

1) I equipped myself with a couple of steaks. Salt and pepper are the only things I like to put on a steak (credit to Alton Brown's I'm Just Here for the Food for this preference), so I figured this would make the differences between basic salt and pepper and the gourmet versions pretty apparent. 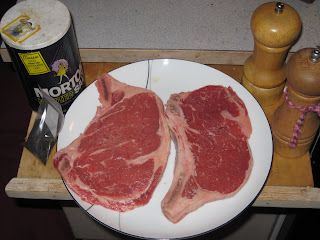 Salts on the left, peppers on the right. Grinder with the special pepper indicated by the purty pink ribbon.

2) I salted and peppered each side of the steaks and let them sit for 20 minutes while the broiler preheated. 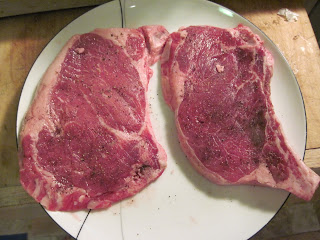 3) I put the steaks in the broiler, 5 minutes per side. 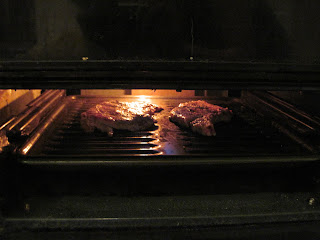 4) I let the steaks rest as long as I could bear (seven minutes in this case) and served with sides of my choice (tots! brussels sprouts!) 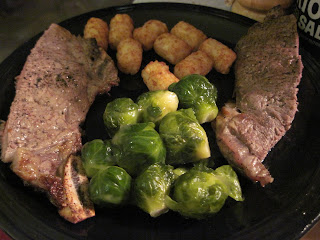 How Did it Go?
- The Smoked Salt has a really, really strong scent before you cook it, which, to be honest, worried me a bit. It seemed that it could easily be overpowering. Fortunately, this was not the case. Cooking mellowed it out a little, while letting it keep the smokey edge. It worked really well with steak, and I bet would be good with lamb as well.

- The Tellicherry Peppercorns seemed to be both more and less subtle than your average black table pepper. The pepper taste was gentler, but the heat level was cranked up. *Full disclosure: I did go ahead and eat one of each type of peppercorn, just to confirm this impression. Whew. It confirmed both that opinion, plus my notion that eating pepper plain is just not a good idea.

If you'd like to see what I wound up doing with these ingredients, click here to see my Iron Foodie recipe: Toasted Ravioli.
Posted by Raej at 4:35 PM 1 comment:

Toasted Ravioli is a local specialty in my hometown of St. Louis, Missouri and is very hard to find elsewhere. In fact, most people who haven't spent time in StL have never even heard of it. This is their bad luck, because it's very very very good. How good? The only hometown food I miss more is White Castle.

Since, as I mentioned earlier, I was already thinking in an Italian/meat-ward direction, Toasted Ravioli was a most acceptable brain wave. As usual, I hit the internet for some recipe theory research, and found some useful stuff.

In fact, I did a sort of proof of concept experiment as a Thanksgiving appetizer. It was definitely well received. But I decided Iron Foodie deserved no less than true, complete insanity. So, I made mine from scratch. Research debts also in the direction of Cooks dot com and Betty Crocker's New Cookbook (the 1st cookbook I owned as an adult).

0) Soak the seaweed in boiling water for 15 minutes (this is macerating. big word, simple concept.)

1) Combine eggs, seaweed, oil and salt in a food processor until blended.

2) Put the flour on a decent sized flat surface and create a well in the middle (a sort of volcano shaped thing; the crater is to hold the liquid.)

3) Slowly work the flour into the liquid until completely combined. (This gets messy. No worries.)

5) Knead the dough on a lightly floured surface for 5-8 minutes.

6) Plastic wrap the dough and rest in the fridge for several hours. 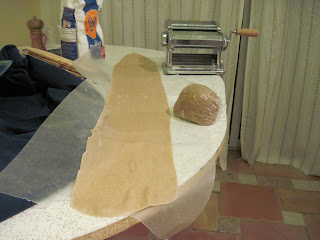 8) Cook oil, pork, salt and pepper in a skillet over medium heat until pork is thoroughly cooked.

9) Add all other Filling ingredients (except cottage cheese) to skillet, cover and reduce heat to low; stir occasionally. 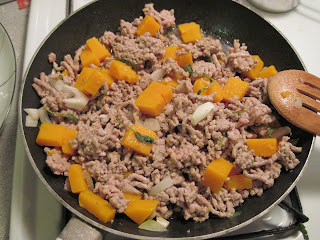 10) Cut one third off of the chilled pasta dough.

12) Fold the pasta sheet in on itself from the ends, roughly into thirds. Sprinkle lightly with flour. The idea is to get it to a width where you can turn it 90 degrees and run in through the pasta machine again.

13) Click the pasta machine down one setting and run the pasta sheet through again.

14) Repeat 13 until you get the pasta as thin as you want it. (For me, this takes it down to the narrowest setting. So you can read through the pasta. Your taste may absolutely vary.) 15) Turn the heat off on the filling.

16) Lay the pasta sheet out on waxed paper. Cut pasta circles out of it with an upside down glass. (There are other ravioli cutting methods, but this one best appeals to my innate sense of laziness.)

17) Add filling and cottage cheese to food processor. Pulse for about 20 seconds, until everything is just combined.

18) Spoon small heaps of filling on one pasta circle.

19) Wet the entire edge of the circle (use water, butter, milk, whatever really…..I used the water from macerating the Porcini Mushrooms). 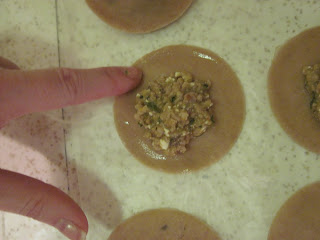 20) Place a second circle on top, and gently press edges together all the way around.
***It's right about here that this becomes the longest recipe I've ever done on this blog. HUZZAH FOR IRON FOODIENESS!***

21) Slice open the chili and scrape out the seeds and membranes.

22) Chop chili and add it, garlic and cream to a small sauce pan. Warm over low heat.

23) Just as the cream wants to try boiling, turn off the heat. 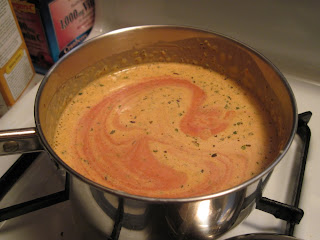 26) Fill a skillet with oil for frying (I like to go about 1/2 inch deep. You do what suits you.) and warm over medium heat.

27) Use a fork to mix together eggs and cream in a bowl.

28) Put the stuffing cubes and cheese into food processor and mix until the cubes are crumbs. Place in a bowl or on a small plate.

29) Dip ravioli in the egg mixture, shake off excess. 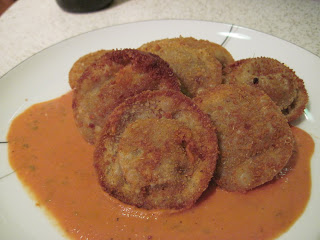 How Did It Go?
It went surprisingly well, given the large number of new things i was trying (ingredients and techniques), and considering that I've not made scratch ravioli in a long long time. Texture was right on, flavor was pretty nice. Mostly a win here.
Also:
- The seaweed gave a really neat color to the pasta dough.
- The mushrooms rounded out the taste of the pork in a way that surprised me.
- The chili sauce wound up being not too hot for me, which is something of a miracle, frankly. And not being in pain, i was able to appreciate the flavor.

What Would I Do Differently?
- More filling! I put about a teaspoon's worth of filling in each ravioli, which wound up being not quite enough. The pasta to filling ratio was too high, which buried a lot of the flavor of the filling when everything was put together. Lacked balance.

- More vegetables! I think I'd up the butternut squash ratio a bit, just to get more vitamins involved. I mean, since you're eating something fried, it's nice to strike a blow for Stealth Health when you can.
Posted by Raej at 4:14 PM 2 comments: